A Marigold is not just another ordinary ornamental floral decoration but a plant with a deep and almost mystical symbolic meaning.

Let us start with its common name that connects these plants with the beginnings of Christianity, referring to the Virgin Mary, who, according to legends, laid bouquets of these flowers on pre-Christian pagan altars instead of gifts of gold.

The legends and the stories confirm that its bright, sunny yellow flowers were a widely accepted sacral gift to deities in many religions and cultures, even before Christianity, such as Buddhism and Hinduism, or pagan cultures of the Maya, Incas, and Aztecs.

Indeed, marigolds have captured the sun in their colors, so it is not surprising that many cultures have associated them with a divine presence or a gift worthy of the gods.

But even when we move away from the connection with religious beliefs, marigolds are considered a symbol of joy, optimism, positive energy, and passion.

Even modern psychology confirms that the golden yellow or orange triggers just such emotions in the human psyche.

Yet, as every coin has two sides, let us say that the marigolds are not always the symbol of positive emotions.

On the contrary, as flower petals retain nocturnal moisture in teardrop-like droplets visible on flowers in the morning, the marigold symbolizes sadness, grief, and mourning!

On the Day of the Dead (Dia de Muertos), cemeteries in Mexico are flooded with marigold buckets!

However, marigolds in Mexican cemeteries are not just an expression of mourning for the deceased! In that part of the world where Christianity and pagan traditions intertwine, marigold is believed to bring the spirits of the dead back to life!

However, many more will claim that marigolds are too lively to be associated with dark and gloomy emotions.

Therefore, do not hesitate to give the flowers to friends or loved ones, since sometimes just one look at the vivid flower bouquet or marigold bed is enough to elicit a spontaneous and sincere smile! 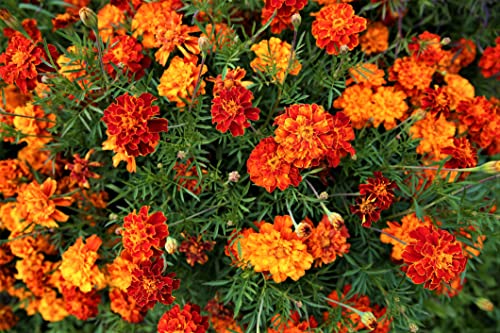